One of the first Church buildings in Coboconk was erected by the Methodist Episcopal Church on the hill overlooking the village.  In 1885 Mr. Chris Moore and Rev H.A. French paddled by canoe to Norland to purchase the building from the Methodist trustees, and it is this date which marks the beginning of Christ Church in Coboconk.

Churchgoing in the late 1880’s was a serious, time-consuming commitment.  Sunday started with Morning Prayer and Communion, then home for a quick lunch and back to Church for 2:30 Sunday School.  After supper, the family would return again to church for Evensong.  By 1889, the Church was growing so fast that the congregation decided they needed a local priest and a rectory.

Rev. Wm. H. Burns was appointed rector in 1914 and had the terrible responsibility of being the religious leader while the Great War tore Europe apart.  Lads from Coboconk and surrounding areas flocked to join the fight for “King and Country”.  Rev. Burns, who was known to all the children as “Daddy” Burns would have the task of keeping the home fires burning and leading the mothers, sisters and wives, in prayer for the safe return of the men in the trenches.

Charlie Shields was one of the first pilots with the newly formed Royal Flying Corps.  Roy Graham and Garth Barjarow were in the heroic attack at Vimy Ridge and the cenotaph beside Christ Church commemorates the ultimate sacrifice made by Garth and a number of his fellow townsmen.  Tom Rutter and Dick Rutter Sr. were other returning veterans from “The Great War”.  Others lived with serious wounds for the rest of their lives.  Harry Jackson, for example, was gassed in one of the early German attacks.  He returned to Coboconk but never fully recovered – even though he lived a full life as owner of the Pattie House and later served as Warden of Christ Church.

Eventually Sunday School was moved from its 2:30 time to a morning time and thus Evensong at 7 pm became the family service.

Until 1939 when the Parish Hall was built, many church functions were held in the sample room of the Pattie House.

Under the supervision of Fred Peel, extensive improvements were made to the exterior of the church in 1925, adding a belfry and tower.   It was also during this period that the Parish Hall was constructed, opening in 1930 with Rev. L.E. Lemon as rector.  He served until 1936.  Funds for the new hall were raised largely by the women of the church with their dedicated work at bake sales, bazaars and many other events.  The parish Hall was an instant success.  Christ Church had room for an ever expanding Sunday School – up to 40 students on a good day, and throughout the years the hall has also been home to Scouts, Guides, Women’s groups, service clubs and more.

By 1937 the Church once again, with God’s help, had weathered the storm and returned to its normal status with the appointment of the Rev. E. Rigby as rector.  Many events were held – some raising less than a dollar.  Crokinole matches in the Church Hall, parish dinners, catering for weddings and a myriad of other activities kept the Church going financially at a time when over a million Canadian men were out of work.

Regardless of who was the Priest-in-charge, the vital work of the parish went on.  For example, on July 12, 1942 14 boys, 13 girls, 3 teachers and two visitors gathered for Sunday School.  In addition to learning about the love of God, the combined 32 young people contributed 87 cents in offerings.

While Christ Church and St Thomas Balsam Lake (closed in 2015) have always been thought of as small churches, they have both witnessed great events and have totaled up some large numbers.  Between the two churches there have been at least 25,000 Sunday services and another 25,000 mid-week events.  Assume an average of just 20 people attends each service or event, and we see that a half a million feet have walked through those welcoming doors!

(The following history was written in 2002; writer unknown)

Looking back over almost 190 years, we are grateful to the small group of Church of England settlers on Sturgeon and Cameron Lakes. For it was these devoted pioneers who, after clearing their own lands and erecting humble dwellings, looked to the task of providing a suitable place of worship for all concerned. Each gave as his fortune dictated, be it land, money or labour and a small log church was built on the hill above the present St. James. 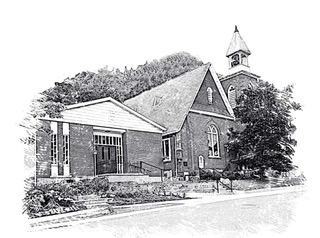 Anne Langton’s letters in the book “A Gentlewoman in Upper Canada”, tell us of congregation meetings often in the Langton home at Blythe Farm on Sturgeon Lake. These were enjoyable occasions and often necessary because of weather and road conditions, even after the church was built.

In the beginning, not having funds to pay a resident clergyman, certain men or women took turns conducting services and, only occasionally, were able to have a journeying minister to officiate at baptisms, weddings and funerals. Later, with money subscribed by friends and relatives in Great Britain, they secured the services of an ordained man and regular worship became the custom.

The silver communion service was presented to the congregation in 1838 when the original log church was opened, and continues in use today.

No one can be sure whether the log church was destroyed by fire or whether it was decided to replace it, but, in any case, a second frame building appeared on the hill around 1852. The congregation walked or rode in buggies up a winding trail from Bond Street or used a flight of eighty steps, with three landings, erected to the east of the present church. This sufficed for almost fifty years when it was felt to be too strenuous a climb for some members and, although there was much controversy over the expense as well as the move, the third and present St. James was built during the summer and fall 1902, the services being held on December seventh. This church serves the Anglican community today.

In 2016, a renovation was completed to join the parish hall and sanctuary, making both fully accessible, more environmentally sustainable, and more welcoming to people of all abilities.

The parish rectory is next door; between it and the church, lies a community garden.